7 Joyful Activities To Help You Meditate 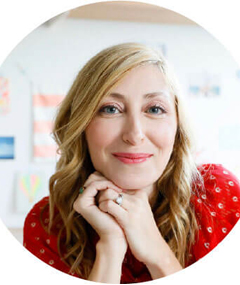 This article originally appeared on ideas.ted.com and is part of a larger series which is found here

It’s a simple fact that often feels like a confession. After all, meditation is hailed as an almost magical cure in self-help circles, and the list of benefits it offers is undeniably impressive. Meditation promotes calm and compassion, decreases stress, and improves attention and concentration. Avid meditators won’t hesitate to point out, breathlessly, that it can actually change your brain. It is one of the most studied non-pharmacologic mental health interventions in the world, and most of the data is overwhelmingly positive.

It’s not that I’ve never tried. I used the apps and the timers. I tried body scan meditations and mindfulness meditations. I tried sitting, which made me uncomfortable, and then lying down, which made me fall asleep. I focused on my breath (until I began to hyperventilate), and I also imagined my thoughts floating away in little clouds (there were a lot of clouds).

And to be fair, I went through a period of a couple of months when I had some success with it. At its best, it felt like I was floating in the ocean, bobbing on waves of pure consciousness. But I noticed this only seemed to happen when I was already calm.

When I was anxious, meditation actually increased my agitation. I felt a profound sense of dissonance, my mind bubbling like it was coming to a boil, trapped inside a body that was desperately trying to hold still. At the end of each effort, I felt drained from the failure and worn out by the attempt. Despite the assurances of meditation evangelists that I just needed to stick with it and that feeling like I was failing was part of the process, I suspected that maybe meditation wasn’t for me.

I gained a new perspective when one day I shared with my therapist that meditation has been such a struggle for me.

“Oh, I definitely wouldn’t recommend meditation for someone with your profile,” she said matter-of-factly.

I was surprised, and strangely relieved. I’d become so used to people extolling the virtues of meditation that I had assumed it was universally beneficial. It never occurred to me that a therapist might not recommend it, or even advise against it. When I asked why, she explained that for some people with histories of unprocessed trauma and physical dissociation, meditation can do exactly what I’d experienced — increase anxiety, prompt flashbacks or trigger other physical symptoms.

In fact, a 2017 study of meditation experiences found that a significant proportion of meditators have experienced fear, pain, dizziness, paranoia, dysphoria and other “challenging” effects. Researchers believe these effects are often under-reported, because studies aiming to understand the benefits of meditation don’t ask about adverse effects. As a non-pharmacologic intervention, meditation is assumed to be harmless.

The moral of this story isn’t “don’t meditate” but rather, that meditation is like many things — great for some people, but not necessarily for everyone.

If it works for you, wonderful! No need to read any further.

But if like me you’ve struggled with traditional forms of meditation, yet still crave a way to settle your mind and ease your anxiety, happily, there are other approaches that can create a similar kind of mental expansiveness to that offered by meditation. These techniques don’t have nearly the same fervor or body of research backing them, but they are valuable alternatives, especially for those of us who find meditation unbearable rather than unburdening.

I’d always thought of visualization as a kind of new age-y cousin to manifesting, but it was actually in therapy where I began to use this technique. During our early sessions, my therapist sometimes asked me to envision a place where I felt safe and calm, describing it out loud as I envisioned it in my mind.

I began to create a garden in my mind, a place I could go when I felt overwhelmed or stressed, or when I struggled to sleep. When anxious, I often come back to this place, adding detail in one corner or another. Some elements are constant, while others change. I always enter the same way, for example, but once inside, I might see different flowers or trees, or I might look around a corner and “find” a new area previously unexplored.

Another time, I was struggling with the noise of constant construction in my building. I was working on my book Joyful at home, and I never knew when the grinding noise would start up, spiking my anxiety and making it impossible to focus.

My therapist asked me to envision something noisy yet innocuous, and for some reason, elephants came to mind. I imagined a crew of elephants in yellow hard hats bumbling around with tools and jackhammers. Whenever the noise fired up and I felt that pit in my stomach, I pictured the elephants and my tension eased. Of course, it didn’t erase the noise, but it helped me find calm amid a situation where I couldn’t gain control.

I find that visualization gives me the same kind of distance and space that many people find in meditation, but it also engages my imagination in the process. Rather than feeling like I need to sit with uncomfortable feelings or ideas, it allows me to transform them creatively — not to avoid them but to work with them in a generative, dynamic way. I haven’t found great research on the use of visualization as a meditation alternative, but there are anecdotal accounts of nurses using visualization with patients, particularly children, as a method of relieving pain.

Adult coloring books had a real heyday in the mid-to-late 2010s, as people sought a creative yet low pressure form of stress relief.

As it turns out, certain types of coloring may help reduce anxiety. In particular, research shows that coloring a complex abstract design such as a mandala or a plaid pattern can reduce anxiety in a meaningful way. Structured patterns like this have strong symmetry that taps into the harmony aesthetic, which promotes calm through symmetry and balance, quieting the visual noise of our surroundings so we can focus more deeply on what we care about. Tied to this, subsequent studies have shown that coloring not only decreases anxiety, but also increases mindfulness and may also improve attention and creativity.

The physicality of coloring may also be helpful to those of us who tend to dissociate from our bodies. The engagement of the hands and the senses can keep us from feeling like we’re swimming in our thoughts.

OK, parents of a child who recently acquired a drum set might not see this activity as calming, but research shows that the rhythmic quality of drumming can be a powerful aid for mental health. In one study, a group drumming initiative resulted in significant reductions in anxiety and depression, along with an increase in overall mental well-being. Drumming also correlated with a decrease in inflammatory markers in the bodies of the participants.

Why does drumming promote calm?

One reason may be the repetition of the sounds and movements (again, a manifestation of the harmony aesthetic). Percussion is considered one of the oldest forms of music-making (perhaps after singing) and may have originated as a way to promote coordination of work among groups of early humans.

Drumming is a grounding activity that lets us blow off steam in a safe and non-aggressive way. Notably, drumming is one activity that has typically been studied as a group intervention rather than an individual practice. It’s possible that solo drumming also has benefits, but current research on drumming tends to focus on the physical experience of rhythm, synchrony and belonging as the key drivers of mental well-being.

For those who benefit from having something outside of themselves to focus on, cloud gazing can be an appealing alternative to meditation. Cloud gazing draws us outside, which has documented mental health benefits, while amorphous, softly shifting clouds give the attention something calming to focus on.

Looking upward may also help, as this increases the amount of light that enters the eye, which itself has distinct benefits for mental well-being.

Little research has been done on cloud gazing (sadly!), however one study points to the benefits of sky views as restorative, and accessible. While green nature views have been widely shown to help reduce stress, sky views are beneficial because they can be accessed even in dense urban areas.

Morning pages are a creative tool devised by the writer Julia Cameron in her celebrated book The Artist’s Way. To do them, you simply write three long-hand pages first thing in the morning, writing without stopping and allowing whatever thoughts arise to go onto the page.

For writers, morning pages are a way of breaking through the pressure of the blank page and opening a line of dialogue with your creative brain. No one has to read them. In fact, you can place them directly into the trash when you’re done if you choose.

Though morning pages are billed as a creativity tool, for me they function as a mental health tool. I discovered the technique while working on the later chapters of my book and found it far more effective than meditation at calming my anxiety around my work. Knowing I had the open space of morning pages as a buffer before sitting down to work on my book alleviated so much pressure that I began sleeping better and enjoying my free time more. I regularly return to the practice if not every day, then several times a week at least.

Walking meditation is a form of meditation in its own right, but even if you don’t have a formal walking meditation practice, some form of mindful movement can be calming. Walking is easy and accessible to most people, and for those who feel stuck when attempting a seated meditation, it can help by engaging the body as well as the mind in the act of quiet reflection.

Benefits of mindful walking include stress reduction and improved cognition among older adults, in addition to the many mental health benefits of increased physical activity that it provides.

And if you’re still struggling to find a way to calm your mind, maybe it’s time to turn to a soothing voice and his “happy little trees.” While it might sound far-fetched, a whole community of internet users have found peace and joy in vintage videos of Bob Ross’s The Joy of Painting.

Some researchers believe that Ross’s soft baritone and the swishy sounds of his brush against the canvas trigger ASMR reactions, also known as “brain tingles.” The popular meditation app Calm has used Bob Ross’s voice in their Sleep Stories series, which is intended to help insomniac users fall asleep. You can watch every episode of his show on YouTube, and if you’re looking for one to get started, here’s a favorite episode.

This post was first published on Ingrid Fetell Lee’s site, The Aesthetics of Joy. 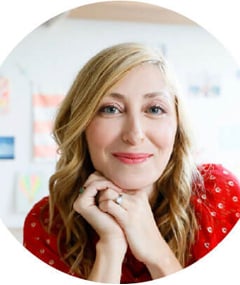 Author bio: Ingrid Fetell Lee is the founder of the blog The Aesthetics of Joy and was formerly design director at the global innovation firm IDEO.