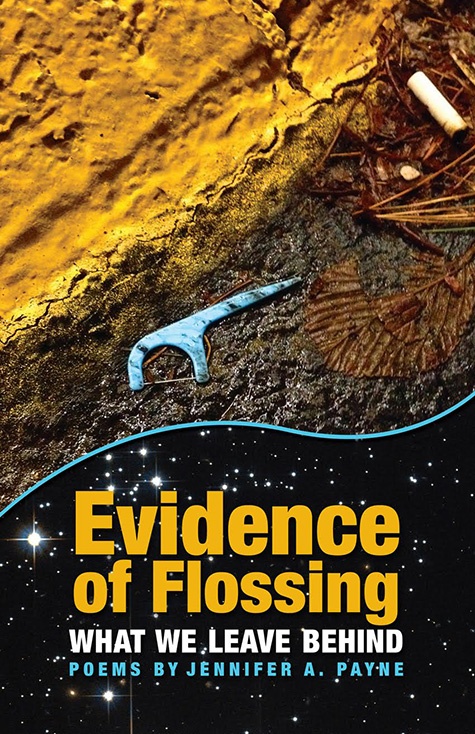 Jen Payne December 6, 2017
CreateWriteNow is pleased to host Jen Payne and her wonderful collection of poems, 'Evidence of Flossing What We Leave Behind', as part of her WOW-WomenOnWriting Blog Tour. 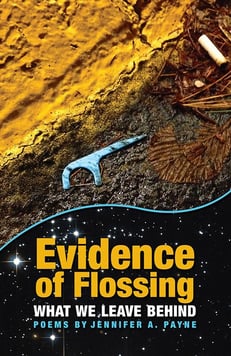 In a dream once, I saw the fabric of the Universe.  It was clearly laid out in fine strands of translucent white dots, as if one were standing inside a room full of beaded curtains.

In the first few moments after waking, I understood clearly that everything is connected: how, if I touched one of the rows of white dots, that touch would reverberate along the whole system of dots; if I breathed or sang or wept, that too would make waves along those strands.

My understanding of all of that was as fleeting as my ability to still my mind, as transient as my understanding of god.  And yet, the image of those dots has remained for me a divine illustration of how it is.

Some of our basic tenets as humans remind us of that: “for every action in nature there is an equal and opposite reaction,” and “as you did it to the least of these my brothers, you did it to me.”

Remember the Golden Rule? “Do unto others as you would have them do unto you.”  What if that applies to everything?

It is not such a foreign concept.  We know that everything around us is made up of atoms.  That there is no real separation between you, me, this book, my cat.  John Muir wrote about it that summer day in 1869: “One fancies a heart like our own must be beating in every crystal and cell.”  Carl Sagan called it starstuff. “It’s an astonishing thing,” he said, “we’re so tied to the rest of the cosmos.”

My new book, Evidence of Flossing: What We Leave Behind, is a book about starstuff.  It’s a collection of poems that speak to the common heart that beats in you and in me, in the woods and on the streets, across oceans and around this planet.

Part social commentary, part lament, the poems are, at their heart, love poems to the something greater within all of us. Their investigation of the human condition and its folly — politics, religion, development, technology, consumerism — is juxtaposed to a series of poems about our natural world and the possibility of divine connection.  Together, they ask the reader to deeply consider the effects of our actions and how they influence everything else in the Universe.

Would God floss?  Do spiders sing?  Can you see the Universe in your reflection?  Find the answers to these questions in more in this new book by Connecticut writer Jen Payne.  Her poems in EVIDENCE OF FLOSSING: WHAT WE LEAVE BEHIND investigate the human condition and its folly, the beauty of our natural world, and the possibility of divine connection.  80 original and vintage photographs include a series of discarded dental flossers that inspired the book's title.

ALA Notable Book author Dale Carlson calls the book "a brilliantly incisive commentary on our simultaneous human sense of beauty and waste and loss."

EVIDENCE OF FLOSSING speaks to the common heart that beats in you and in me, in the woods and on the streets, across oceans and around this planet. It asks us all to consider the effects of our actions and how they influence everything else in the Universe.

Evidence of Flossing: What We Leave Behind is available in print on Amazon.

“The poems in Evidence of Flossing: What We Leave Behind are a brilliantly incisive
commentary on our simultaneous human sense of beauty and waste and loss.” — Dale Carlson, ALA Notable Book author

“In Jen Payne’s exquisite introduction to Evidence of Flossing, she provides the purpose of this book: to illustrate, poem by poem, the very fraught relationships which define us, human to human, human to earth and animal, and human to the unifying spirit, which may or may not be her lower case “god.” She is sober, admonitory, enraptured and antic by turns, her illustrative photographs always a source of pleasure or irony — often both. This is a most unusual book, richly thoughtful and sorely, sorely needed.” — Nancy Fitz-Hugh Meneely, author, Letter from Italy, 1944

“It’s uncanny how Jen Payne grabs hold of seemingly ordinary strands of life — then surprises us with new meaning. A master at storytelling, Jen brings us to the realization that the stories she shares are actually ours. An engaging, thought provoking and masterful reflection on our collective legacy in this world.” — Mary O’Connor, author, Life Is Full of Sweet Spots and Dreams of a Wingless Child. 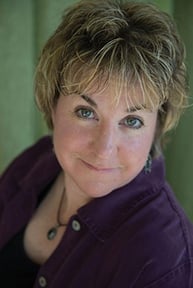 Jen Payne is inspired by those life moments that move us most — love and loss, joy and disappointment, milestones and turning points.  Her writing serves as witness to these in the form of poetry, creative non-fiction, flash fiction and essay.  When she is not exploring our connections with one another, she enjoys writing about our relationships with nature, creativity, and mindfulness, and how these offer the clearest path to finding balance in our frenetic, spinning world.  All of her writing efforts can be found on her blog, Random Acts of Writing or on Facebook.

Installations of her poetry were featured in Inauguration Nation an exhibition at Kehler Liddell Gallery in New Haven (2017), and Shuffle & Shake at the Arts Council of Greater New Haven (2016).  Her writing has been published by The Aurorean, Six Sentences, the Story Circle Network, WOW! Women on Writing, and The Perch, a publication by the Yale Program for Recovery & Community Health.

Jen is the author of LOOK UP! Musings on the Nature of Mindfulness, and the new book Evidence of Flossing: What We Leave Behind, a collection of 73 poems and more than 80 original and vintage photographs, including a series of discarded dental flossers that inspired the title of the book.

Evidence of Flossing: What We Leave Behind
Jennifer A. Payne, author/photographer
178 pages, 5.5 x 8.5, Color Photos
$21.99 (plus tax + shipping)
Available from Three Chairs Publishing

For more about Evidence of Flossing, visit www.3chairspublishing.com, or click here to purchase your copy today.